Large Eddy Simulation of an Asymmetric Jet in Crossflow 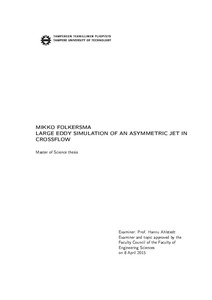 A high fidelity large eddy simulation (LES) of an asymmetric jet in crossflow is performed to study passive scalar mixing. The configuration includes the most relevant physics of a film cooling application. The simulation is validated with an experiment which has exactly the same geometry.

The compound angle injection leads to an asymmetric counter-rotating vortex pair (CVP) in which one vortex dominates the other. This CVP is highly responsible for the shape of the jet in the far field. The entrainment of the present jet is calculated and compared with a symmetric jet without a compound angle.

The evolution of the turbulent scalar flux is studied by analysing its transport equations. The production term is closely examined because its shape resembles the turbulent scalar flux. In addition, the commonly used algebraic models in Reynolds-averaged Navier-Stokes (RANS) exploit it. The algebraic models are evaluated and the applicability of the models is further discussed.