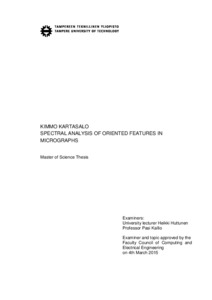 Image analysis of micrographs is highly important in modern biomedical research. Oriented features, such as the myofibrils of muscle cells and other fibrillar structures of the cytoskeleton, the mechanical backbone of cells, are examples of targets which can be analyzed based on micrographs. Image based analysis of such structures is often limited to qualitative evaluation by human experts, hampering the throughput, repeatability and reliability of the analyses. Software tools are not readily available for this purpose and the existing methods typically rely at least partly on manual operation.
In this study, CytoSpectre, an automated software tool based on spectral analysis was developed. The software allows analysis of oriented features via quantification of orientation and also size distributions of the structures of interest. In principle, the software is compatible with most 2D images. CytoSpectre utilizes classical spectral estimation methods to estimate the power spectrum of a micrograph and based on the spectrum, computes parameter values describing, among others, the mean orientation, isotropy and size of target structures. By constraining the spectral analysis to a limited range of spatial frequencies, the analysis can be further tuned to focus on targets of particular size at cellular or subcellular scales. The software was implemented in MATLAB and it can be operated via a graphical user interface on basic hardware without any programming expertise.
Using a combination of freely available software and algorithms developed as part of this study, thousands of artificial micrographs with realistic characteristics and varying image quality were generated to quantitatively analyze the performance of CytoSpectre. The software was also benchmarked against FibrilTool, a recently published orientation analysis tool. CytoSpectre was found to be tolerant against noise and blurring and superior to FibrilTool when analyzing realistic targets with degraded image quality. Performance of the method was evaluated by comparisons with manual measurements performed for real images by a panel of human experts. The analysis of real images indicated general good agreement between computational and manual results while also revealing notable expert-to-expert variation. Moreover, the experiment showed that CytoSpectre can handle images obtained of different cell types using different microscopy techniques. Based on these results, the tool is expected to be useful in diverse applications dealing with biological structures whose orientation and size distributions are of interest. While designed for use within the biomedical field, the software could also be useful in non-biological applications such as materials research.