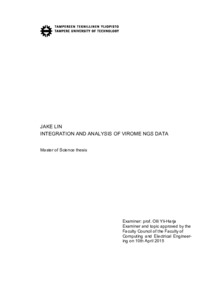 Type 1 Diabetes is a growing disease impacting young children. The disease is caused by the pancreases producing insufficient amounts of insulin required for the body to convert sugar and starches into required energy. There is no known cause to Type 1 Diabetes though there are cited genetic and environment associations. An environmental implication is viruses disrupting host immune and regulatory systems using molecular mimicry inducing islet autoimmunity. One observed diabetes correlation is the presences of Picornavirus family, including enterovirus and poliovirus. Taking ad-vantage of advances in the sensitivity and accuracy of Next Generation Sequencing, Diabetes Prediction and Prevention researchers have started a study to investigate the viral genome diversity and whether viral genomes can accelerate islet autoimmunity, when the host fails to produce insulin, triggering diabetes.
This application of Next Generation sequencing provides an unbiased study and essentially applying metagenomics techniques to disease research. Sequence analysis requires processing and storing of vast amount of information. The other challenges are data integration, interpretation and lack of reference viral genomes. This thesis describes an open sourced Web 2.0 project to integrate and manage analysis results upon application of Velvet, for de novo assembly and BLAST for viral strain identification.
Because of the lack of reference, majority of next generation reads are unmapped. Ac-counting for these unmapped reads and also investigating molecular mimicry, additional computational analysis includes translating raw sequence reads into protein fragments. Frames of these fragments were matched with islet autoimmunity protein markers. The preliminary matched results appear valuable with case affected samples in clear majority. The assembled results can be dynamically plotted on the web as aligned protein tracks for visual pattern and density inspection.