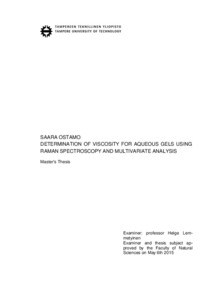 This thesis was conducted for Orion Corporation. The aim of this thesis was to examine, whether the viscosity of aqueous gels can be modelled from their Raman spectra with multivariate analysis. Previously the method's applicability for viscosity modelling of mineral oils and kerosene, for example, has been studied and the method's suitability for concentration modelling has been established. In a previous study done for Orion Corporation the suitability of the method for viscosity modelling of gels was discovered. The main objectives of this thesis were to confirm the results of the previous study and to discover the factors affecting the applicability of the method on different materials.
Seven gelling agents used in pharmaceutical industry were examined: potato starch, hydroxyethylcellulose, hydroxypropylcellulose, two carbomers, polyvinylpyrrolidone and a blend containing polyacrylamide. Sample sets were prepared from the gelling agents and water and their viscosities were measured with a rotational rheometer. Four of the materials were suitable for Raman measurements with the selected instrumentation. The Raman spectra of hydroxypropylcellulose, the two carbomers, and polyvinylpyrrolidone, were recorded. Partial Least Squares regression (PLSR) models used for predicting viscosities of unknown samples were constructed based on the Raman spectra.
The carbomers were well suitable for viscosity modelling, and their PLSR models predicted the viscosities of unknown samples accurately. The PLSR model of hydroxypropylcellulose resulted in great variation in the predicted viscosity values, and the model could not be considered reliable. A PLSR model could not be constructed from polyvinylpyrrolidone and therefore its viscosity values could not be predicted.
It was confirmed in this study that the Raman spectroscopic method combined with multivariate analysis can be used for modelling of the viscosity of aqueous gels. No direct causal connection could be established between the material properties and modelling results, however. The most important factors affecting the applicability of the method were the appearance and concentrations of the gels samples. In the future, more comprehensive sample sets with lesser variation between the samples should be studied. More complex materials and the effect of measuring systems of Raman spectra and viscosity should be studied.