Optimization of the first coating layer on TOC-based coil coatings 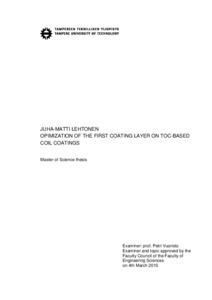 Traditional coil coated steel product consists of two layers of coating, which are applied on top of a pretreated hot-dip-galvanized steel coil. In other fields of industry the TOC coating method is quite widely used and it has attracted attentions also in the coil coating industry. The economically and environmentally sound alternative designed to replace the traditional pretreatment and the base coating layer has increased research and development of the TOC method.
Thin organic coatings in coil coating applications have been studied quite scarcely in SSAB. This thesis is a part of the HYBRIDS – Hybrid Materials program, which studies among other subjects the potential of the TOC-method. In this thesis the goal was to optimize a coating layer on top of two separate TOC-substrates. The objective of the thesis was to find the most suitable binder, film thickness and curing cycle combination for the first coating layer of the TOC based product. The chemistry of the studied binders was mainly based on polyester and PVdF chemistry. With isocyanate crosslinked binder system, a polyurethane-chemistry based binder was also introduced to the studies. With all of the previously mentioned binder systems, the film thicknesses and curing cycles were varied to test a wide variety of property combinations.
The optimization started with the results of the accelerated environment exposure testing, with which the first elimination of binders was based. The mechanical testing data was analyzed with statistical method ANOVA. With the statistical analyzing method the most potential binder, film thickness and curing cycle for each TOC was selected from both of the binder categories. The final products were compared to reference samples, which were treated with the same paint process. The samples used for the references were traditionally pretreated and untreated HDG-steels. The final conclusions on the optimized products were done based on accelerated environment exposure testing and mechanical testing.
With the optimization process a clear indication was observed, that the film thickness variations and binder selection affects the properties of the product significantly. The thickest dry films performed with best results. A significant difference was not observed with the curing cycles, but marginally better results were observed with double curing with the TOC 2 substrate. 70 % PVdF / 30 % PMMA ratio binders performed with best results with both of the TOC substrates. TOC 2 had significant difficulties with polyester-chemistry, which led to a series of separate studies. Isocyanate (instead of melamine) crosslinked binder worked perfectly with the said substrate.
Accelerated humidity exposure testing results and mechanical resistance testing results reveal a significant importance of the pretreatment or TOC-layer. HDG steel with any sort of binder suffers a significant amount of damage and deterioration during exposure to humidity in elevated temperatures. Mechanical resistance results show a similar trend. The traditionally pretreated samples and TOC based samples, when compared against each other, showed notable but not significant differences on behalf of the TOC based samples. A conclusion from the testing in this thesis is that the TOC based product can perform at least as well as the traditionally pretreated product. Although the results are quite encouraging and positive for the TOC based products, the results are not unequivocal and can only be considered as a guideline towards future studies and research projects.