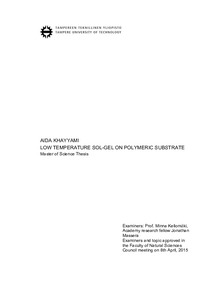 Master's Degree Programme in Biomedical Engineering
This publication is copyrighted. You may download, display and print it for Your own personal use. Commercial use is prohibited.

Due to the flexibility in preparation process, the sol-gel method has gained a huge interest from the industry and also various studies have been conducted in this area. The processing temperatures are low and there is a wide possibility to vary different synthesis parameters to achieve coatings with optimized properties. The process begins from a solution in which, particles and clusters are produced by hydrolysis and condensation reactions, results in to the formation of a sol. The particles and clusters will grow and aggregate and form a gel, which will be dried and heat treated. In this study, sol-gel method was used to apply thin films on polymeric biosensors to protect the conductive layers from reacting with water. This may lead to improve the durability and stability of the resonance characteristics of biosensors in aqueous environment.
Two types of inorganic and hybrid sol-gels were prepared in this study. The inorganic TiO2 films were densified using a laser, in order to heat the film locally and prevent the destruction of polymeric substrate. In the second step, a hybrid sol-gel (organic/inorganic) was developed, to allow curing using heat treatment at temperature adequate to maintain the structural integrity of the substrate. The hybrid sols were prepared by hydrolysis and condensation of γ-methacryloxypropyltrimethoxysilane 98% (MAPTMS) and titanium butoxide at different molar ratios, aging time, curing temperature and number of layers.
Structural characterization of the coatings was performed using scanning electron microscopy (SEM), fourier transform infrared (FTIR) spectroscopy, atomic force microscopy (AFM), and optical microscopy. Contact angle measurement was performed to investigate the hydrophilicity of the coatings. Immersion experiments were conducted in simulated body fluid (SBF) to evaluate the corrosion resistance of the coatings.
The results indicate that, the lasers that are working in the UV and IR spectral region should be used for densification of titania films. On the other hand, it was found that, corrosion resistance of hybrid coatings was inﬂuenced by the molar ratios of MAPTMS: titanium butoxide and number of layers of applied film. It was seen that, coatings at higher inorganic content had higher porosity and as a result, lower corrosion resistance. A higher corrosion resistance behavior for samples with five layers also was noticed.
It was concluded that, the most promising samples were the ones containing lower inorganic content which were cured at 60˚C and containing five layers.