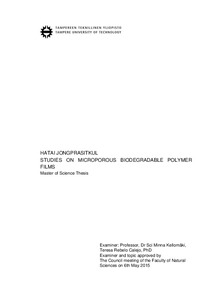 Breath figure method or BF was the main technique in this project to create polymer films with porous structure for RPE cell culture due to the method being simple and inexpensive and enabling the formation of evenly porous honeycomb-like pores in polymer films. Various parameters of BF method leading to different set of morphologies in pore size, pore number and order. By doing so, it was the aim of this project to develop porous films based on low toxicity components and can be applied in tissue engineering applications.
The project is mainly divided into three parts: (1) preparation of polymer films (2) characterization of polymer films. The procedure for creating porous polylactide (PLA) and polycaprolactone (PCL) films was done by varying different parameters to acquire the honeycomb-like structure. The parameters considered for film preparation were mainly the type of polymer (PLA and PCL), polymer concentration, solvent (ethyl acetate and THF), surfactant (Tween80 and PVA), surfactant concentration and percentage of relative humidity in the environment. The structural features such as pore sizes, pore distribution, and pore arrangement were investigated via optical microscopy and atomic force microscopy. Contact angle measurement was used to measure the wettability of the surface of the films. Film thickness was measured using a micrometre.
The results showed that various parameters (polymer type, polymer concentration, solvent, surfactant and humidity) could affect the structural characteristics of thin films such as homogeneity of films, pore size, pore distribution, wettability and thickness. Honeycomb pore films could be produced from PLA solution (26 mg/ml concentration) and ethyl acetate with Tween 80 under humid environment (85-95 of RH %), which produced a good arrangement of pores (honeycomb-like pattern), and pore sizes in the range 2-4 µm.
It was concluded that increasing concentration of polymer could reduce pore sizes and increase the film thickness accordingly. Adding an amphiphilic component or surfactant could reduce pore size also. Moreover, contact angle decreased when films were prepared in the presence of surfactant compared to films prepared without surfactant. Honeycomb films with minimal toxicity were obtained in this work, but it was only in small area and the improvement should be carried out in near future.