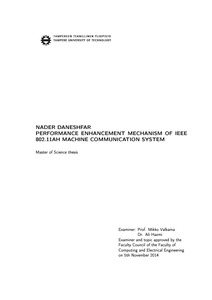 As the Internet gets more populated and the number of devices increase dramatically, demanding connectivity anytime, anywhere and for everything, the urge for a novel concept is raised. Consequently, Internet of Things (IoT) is introduced to shed a light on the vision of the future Internet with tremendous amount of "things" interconnected to each other while utilizing various technologies for different applications. As a wide range of wireless technologies are developed and are extensively used worldwide, IEEE 802.11 working group for WLAN standards is developing a new amendment referred as IEEE 802.11AH targeting mainly the IoT based applications. The new amendment has inherited many characteristics from the legacy IEEE 802.11 while benefiting from new enhanced features defined specifically for IoT and Machine to Machine communications (M2M) systems. Ultimately, IEEE 802.11AH which has been defined to operate in sub-1 GHz band, is expected to support high number of simultaneous connections up to 6000 devices for a 1 km coverage range.

This thesis implements some of the enhanced features for IEEE 802.11AH and conducts the corresponding evaluation based on a developed simulator. The aforementioned simulator has been compared to a Markov chain based analytical model, developed in this research. The results have shown that the developed system level simulator is following the results from the modeled network with high accuracy.

The developed system level simulator has been used in performance evaluation of the IEEE 802.11AH main features like the restricted access window (RAW) and sectorization schemes in the case of single and multiple APs deployments scenarios. It is concluded that the implementation of these features, help to improve IEEE 802.11AH overall performance. The performance measures considered in this evaluation are throughput, energy efficiency and average delay in sending successful packets, respectively. Moreover, for resolving the coverage requirements there is a trade-off in using single AP or multi AP configuration. Implementing more APs results in more network capacity while causing additional interference to the network. The RAW and sectorization mechanisms can fortunately reduce this interference by minimizing the hidden node probability and mitigating against the overlapping BSS resulting problems.