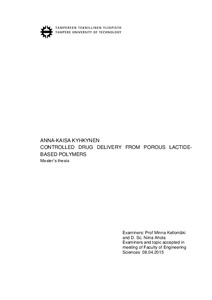 Drug delivery devices (DDDs) are small implantable devices making sustained release of drug possible over defined time period. DDDs have numerous advantages compared to conventional ways of dosing drugs. Traditional ways like oral pills have numerous disadvantages. More safety and efficacy methods are needed while better patient compliance is achieved. At the same time, unwanted side effects can be minimized while drug is targeted into specific site with minimal released concentration. So far, mostly nondegradable DDDs have been available. Their major drawback is that they need removal after the drug is released. There is a need for biodegradable implants that are metabolised from body after DDD has performed needed actions.
There are many kinds of DDDs, but this thesis concentrated in matrix type biodegradable DDDs, where drug is homogenously dispersed in a matrix polymer. For study, two very different drugs were chosen: ascorbic acid salt and dexamethasone. Polymers were prepared by polymerizing lactide and caprolactone in presence of ethylene glycol as co-initiator. Block structure was formed where PEG was left in middle of polymer chain. Commercial copolymer of caprolactone and lactide, P(CL-LA) was used as comparative polymer. Drug release test series was done to both, porous and nonporous samples. Characterization was done by using techniques like differential scanning calorimetry, thermogravimetric analysis, size-exclusion chromatography, capillaryviscometry and microcomputed tomography. Drug release was monitored using ultraviolet/visible-spectrophotometer.
Many different factors were observed to have an effect on the drug release. In general PEG incorporation into backbone increased release rates. Also, type of lactide had effect to on the release. Content of drugs was not observed to have much effect on the release profile in general, but it was possible to tailor release rates. Processing samples with super critical CO2 increased release rates of all samples. Most of all, properties of drugs affected in great extent to release kinetics and release profiles of drug-polymer combinations. AAs had relatively weak interaction with matrix polymers. Release was very fast in most of cases and standard deviations were relatively high in every measurement. For dexamethasone, sustained nearly zero-order kinetics was possible to achieve for some materials.
These materials clearly have great potential in drug release applications in future. More material characterization and degradation study could be useful to do for better understanding of behavior of used drug-polymer combinations.