Properties and Behaviour of Switchable Adhesive 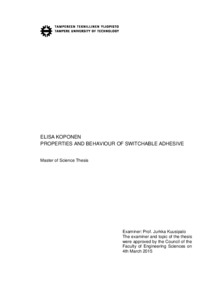 The purpose of this thesis is to study and characterise the properties and the behaviour of the adhesive that switches off and on when heat is applied. To study the changes, the adhesive coated on PEN film was laminated on to microscope glass slide to and then tested after curing at different temperatures and times.
The properties of the switchable adhesive changed when it is cured at different temperatures. The adhesive was seen to switch from PEN film to glass slide after it was cured at 80 °C. The surface energy of the adhesive was studied before and after the switch and it was found that the surface energy changes from 50 dynes/cm to 70 dynes/cm, after the curing temperature increased to 80 °C. The FTIR showed another change after curing the laminate at 160 °C. From the peel tests the second change was seen to start already at 140 °C and it was seen that this change occurs faster with higher curing temperatures. The change at higher temperatures was also detected with DSC. To characterise the reaction further, the reaction kinetics was calculated based on FTIR analysis.