A new approach for collecting data in Wireless Sensor Network 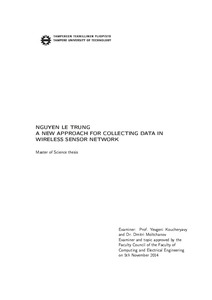 The aim of the thesis is to propose a new way for collecting distributed data in Wireless Sensor Network (WSN) which can overcome the drawbacks existed in modern Wireless Sensor Network systems. The short lifetime and large number of needed sensor nodes problems are investigated to get the major causes for those disadvantages of existed WSNs. Unmanned Aerial Vehicle (UAV) and Bluetooth Low Energy are two new technologies considered in to WSN system design for reducing the sensor node’s energy consumption and decreasing number of deployed sensor nodes.
This work concentrates on analysis how WSN can be improved in the new system. First, the operations of chosen technologies for the new system are examined to show how they meet the target requirements. Second, the energy consumption for BLE single connection is examined to estimate the life time of proposed system. And finally, the number of needed nodes for the new system is calculated to compare with the required nodes in the modern systems in order to keep both systems operate normally. This is done to prove how the proposed WSN system is more efficient than modern systems.
The analysis is conducted mainly by using MATLAB software to simulate the behaviors of proposed system. The simulation focuses on two aspects: number of required nodes for covering and number of nodes for keeping the connectivity in random deployment. The number of nodes for covering the desired area is estimated by calculating the percentage of area’s fractions that are not covered by any sensor. And the number of nodes for maintaining connectivity is estimated to meet the requirement that the whole network is at least 1-connected. Both calculations are using probability-based algorithm and applied in random deployment scheme