Deploying a modular application into a running automation system 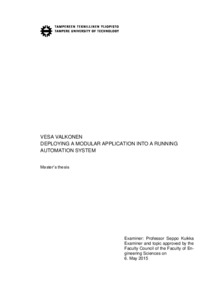 Automaatiotekniikan koulutusohjelma
This publication is copyrighted. You may download, display and print it for Your own personal use. Commercial use is prohibited.

Industrial systems are commonly controlled by different kinds of controllers. In advanced systems, these controllers can be computer-like devices containing an operating system, a processor, a run-time memory, a mass storage and optionally other components. The difference between controllers and computers is that the controllers usually have less available computing resources, more restricted tasks and real-time requirements which are typical for automation systems.

In this thesis some possible techniques are investigated that could speed up the development process of the applications in the controllers. When developing those applications, eventually there will come a need for testing them in a real environment. In this case, the automation system needs to be shut down for the time of deploying new applications and then it needs to be restarted in order to test the new applications. In many automation systems, the restarting process is a slow and expensive operation, which limits the amount of application combinations that can be tested and thus slows down the development process. This thesis focuses on this problem by investigating the possibility to change the used application when the system is running.

The first part of the thesis discusses theoretically the problem at hand, available techniques, implementation requirements, possible problems to appear and evaluation criteria for possible implementations. After this, the most important techniques affecting the implementation are evaluated. It is concluded that real-time operating systems provide better real-time characteristics than general operating systems patched for real-time usage. It is also noted that the characteristics of and special requirements for an automation system greatly affect when deciding which kind of an implementation technique should be used. No generally applicable solutions could be presented.

Finally one solution proposal is implemented in order to test the application reconfiguration technique in practice. Measurements done during testing give guidelines for the usability of the technique in different use cases. It is concluded that the technique could be used for development and testing of systems filling the preconditions. This technique cannot be recommended to be used in final automation systems without good reasoning and extensive focus on safety and security matters. As the final conclusion, the application reconfiguration technique is seen as a possible and beneficial feature in limited use cases.