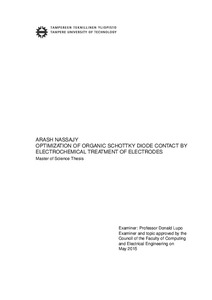 The development of the organic printed electronics facilitates manufacturing low-cost, light-weighted ﬂexible electronic components and circuits. The ﬂexible circuits have the potential to be widely used in the future electronic systems. For instance, the chip used in the passive Radio Frequency Identiﬁcation (RFID) tags can be fabricated on ﬂexible substrates. These passive tags acquire their energy from the incident electromagnetic waves via a harvesting circuit.
The Schottky diode is the main part of the harvesting circuit in order to rectify the
input AC signal and deliver the DC output signal required to power the main circuit. The acquired energy is augmented if the rectiﬁcation ratio of the diode increases. The rectiﬁcation ratio increases through increasing the forward current or reducing the reversecurrent of the diode, which can be realized by optimizing the metal-semiconductor interfaces. In fact, the optimization of the ohmic contact increases the forward current, whereas optimizating the Schottky contact decreases the reverse current of the diode.
In this thesis, the optimization of the ohmic silver-semiconductor interface of the organic Schottky diode has been studied. The optimization is fulﬁlled through controlling the thickness of the silver oxide layer by utilizing anodization as an electrochemical treatment. The performance of the diode was evaluated by examining the current-voltage and AC rectiﬁcation characteristics of the diode. It was observed that the forward current, and accordingly, the rectiﬁcation ratio of the diode increases as the thickness of the anodic oxide layer increases. The augment of the rectiﬁcation ratio increases the DC output voltage of the half-wave rectifying circuit. However, the existence of the charged traps inﬂuences the DC outputs of the rectiﬁer for the diodes with the same rectiﬁcation ratios.