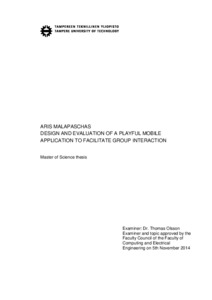 People are often involved in situations where they are required to interact with a group of strangers. The social interaction in these situations can be hindered by several factors, such as a person‟s shyness or inhibition, and the lack of common ground. In order to overcome these obstacles, various group activities known as ice-breaking or team-building activities, have been developed and put to use.
Electronic mobile devices with networking capabilities like tablets and smartphones are nowadays used extensively in everyday life. One of their many use cases is to help people socialize, either by meeting new people or communicating with friends. Additionally, video games have been proven efficient in motivating people to socialize, either by inspiring players to form groups and communities over distance, or by facilitating interaction between collocated people.
The main objective of this thesis is to design, implement and evaluate an ice-breaking activity for a group of strangers, utilizing the benefits of mobile technology and video games mentioned above. The result was a quiz-based, multi-player, mobile game called Who‟s Next, built for mobile devices that run the Android operating system. The Wi-Fi Direct framework was used to establish connection and data exchange between the devices.
The thesis was written within the borders of the Human-Technology Interaction research field, using the User-Centered Design methodology. Thus, the thesis begins with a theoretical study on video games and their social impact, and the different social relationships and groups between people. Next, a description of traditional ice-breaking activities and their characteristics is presented. Moreover, previous attempts to utilize technology -and mobile devices in particular- in such activities are explored.
To evaluate the effects of the game as an ice-breaker, a user study with six group sessions of 4 to 5 participants were conducted. The participants‟ behaviour during the sessions, as well as their feedback given in an interview afterwards, were examined and analyzed to form conclusions about the appropriateness of the game and the players‟ overall user experience. According to the results, Who‟s Next was found to be an engaging application that encourages social interaction in a group, and which helps strangers get to know each other. Most participants found it preferable to other ice-breaking activities, since it provided more a comfortable way to share their personal information with a group.