Experimental study on adsorption storage of gases on solid materials 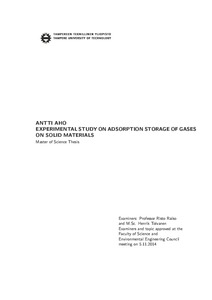 The goal of this thesis was to study adsorption storage of gases, mainly methane, in porous solids. The study included reviewing literature, building an experimental setup, preparation of samples, adsorption measurements and the analysis of the results.
An experimental setup was constructed to study the bulk storage of gases. The setup was based on the gravimetric method, but due to limitations in both funding and time, the accuracy of the setup is far from that of its commercial equivalents. It, however, enables the studying of bulk storage properties of large sample amounts, which allows the elimination of uncertainty due to sample heterogeneity. A minimum sample amount of 50 g is recommended for future experiments.
Carbon samples were prepared to be studied as adsorbents. Spruce cubes were carbonized with both slow and high heating rate and some of the samples were chemically activated to produce activated carbon. Adsorption on a commercial activated carbon was studied for comparison. Uptake values of approximately 0.05 ± 0.02 g CH4 /g carbon in 35 bar and 22 °C were measured for both the best prepared activated carbon sample and the commercial carbon sample. The uptake is much lower than the uptake goal set by the U.S. Department of Energy of 0.5 g CH4 /g carbon, which shows the difficulty of preparing of good adsorbents.