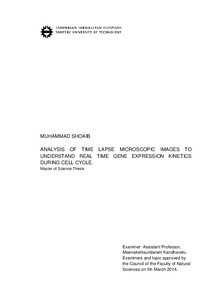 Series of transcriptional events are one of the central processes that define activity of the cell and population behavior with response to changing environment. The duration of events consisting of active (ON) and inactive (OFF) states regulates the transcriptional burst. However, the exact mechanism of ON/OFF states kinetics over the cell phases in Escherichia coli remains to be fully elucidated. We use single mRNA detection method in live cells to study the ON/OFF mechanism in first transcriptional (TF) and consecutive events (TC) regulated by Plac and Plac/ara1. A programme is written that can measure the time duration after cell division and appearance of first RNA molecule.Further the code is extended to determine burst size and probabilities. We determine that the duration of TF ON/OFF is inversely proportional and are opposite to TC. Both states behave differently over the cell cycle in TF resulting in reverse exponential trend. Transcription initiation from downstream and upstream promoter regions affect the dynamics of ON/OFF states in fast and slow dividing cells correspondingly. Duration of TF ON state predefines the behavior of TC by modulating number and frequency of mRNA being produced. Moreover, we show that delayed OFF time in TF affects dynamics of both states in TC. Delay in production of TF burst is ruled by upstream promoter region. We further independently validated the transcription delayed time by elongation arrest experiments which shows that mRNA noise in TC is determined by delayed OFF period in TF. Finally we observed that noise modulation depends on transcription initiation region. Thus, we claim that TF regulates the future cell to cell diversity of the population.