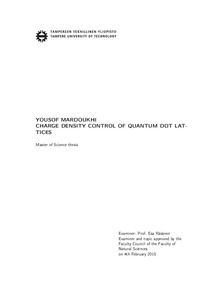 The complexity of physical systems in nature is an obstacle for human desire and curiosity to explore new realms of knowledge. As we go further and further, more powerful computers with higher capability both in processing and storing of information are needed. According to Moore's law, the computational power of devices grows exponentially, meanwhile their size decreases at the same rate. This trend is getting saturated and a new jump into a new scale cannot be avoided. Devices manufactured with smaller size exhibit quantum mechanical behaviour. Due to the intrinsic uncertainty which quantum mechanics has, the behaviour of these systems must be controlled with great precision.
Deterministic logical computations cannot be done by these devices, since logical operations need to have well-defined sets of input. This is a crucial concern especially if the set of inputs corresponds to the states of quantum mechanical systems. Quantum optimal control theory lets us identify the constraints one has to consider for the sake of the desired manipulation of quantum mechanical systems.
The aim of this project is to exploit the controllability of quantum dot cellular automata which are among the candidates for the next generation of transistors as building blocks of logical circuits.