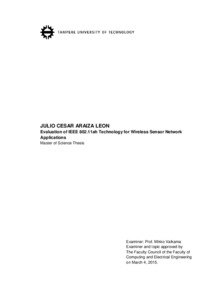 We are entering into a new computing technological era where communications are established not just user to user, or user to machine, but also machine to machine (M2M), machine to infrastructure, machine to environment. This then brings out the idea of acquiring data from the environment, process that data and use it to obtain a benefit, and the way to make this happen is by deploying a network of sensors which will provide an application with the desired sensed data. A sensor network is for practical reasons, nowadays considered as a Wireless Sensor Network (WSN).

As we move from static web to social networking and furthermore to ubiquitous computing, the amount of wireless devices out there is increasing exponentially. This has triggered a series of challenges for communications technologies as many new requirements need to be addressed. Low-cost, low-power and long-range coverage are the key requirements when designing a WSN. Since the communications subsystem in a WSN is the one dragging most resources, the WSN market is demanding new communication technologies to improve the performance of their current applications, but also to empower innovation by creating new application possibilities. Consequently, a new technology proposal has emerged as a solution to the previously mentioned requirements; the IEEE 802.11ah. This is an amendment to the well-known legacy IEEE 802.11 technologies and promises coverage for up to 1km with at least 100kbps, and support a large amount of stations.

This Master’s Thesis offers an insight to this new technology by evaluating its performance through an analytical model which is first developed and then evaluated in MatLab 2014b. A series of performance metrics have been considered in this work with the intention of evaluating its feasibility for WSNs. Different use cases are presented to give an idea of how this new communications standard would perform in real-life scenarios.

Based on the obtained results, it is concluded that the standard would perform well when implemented in WSN. But what differentiates the IEEE 802.11ah from its close competitors is the fact that substantial infrastructure using IEEE802.11ah and its amendments already exists, for which the transition to its use seems to be an easy bet.