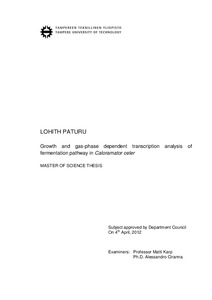 Caloramator celer strain JW/YL-NZ35, formerly known as Thermobrachium celere is a unique alkalithermophilic organism that has the potential to solve energy problems in the future because of its hydrogen production mechanism. However in order to use this organism in industrial scale, more intrinsic understanding of the genetic and metabolic functioning of the organism is needed. The aim of this work is to undertake a transcriptional analysis of the growth and gas phase dependant fermentation pathway in this organism. This is done in order to better understand the genetic factors involved in hydrogen production and to monitor the pattern of gene expression in different physiological states of the cell. This transcription analysis was done using a Real time quantitative PCR that uses a fluorescence molecule for real time detection. This is a very sensitive process that gives reliable results. Two different housekeeping genes recA and polC were used as normalizing factors in order to calculate the relative gene expression and 2-ΔΔCT method was used for this purpose. Through this analysis, the interdependence of formate, acetate and ethanol pathways with each other, and their combined effects on hydrogen production was studied. It was seen that formate and ethanol pathway is in direct competition with both the hydrogenases. Downregulation of hydrogenase genes because of ethanol and formate pathways was seen. It was also found that the cultures grown in artificially stressed gas phase media had a widespread downregultaion of its genes. The soluble metabolite was measured and it was correlated with the transcription data. Decrease of pH and increase of hydrogen partial pressure were the leading cause for the downregulation of mbhL and hydA hydrogenase genes. Increase in hydrogen partial pressure also led to increased ethanol production and adhE gene upregulation.