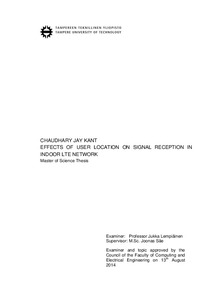 People spend approximately 90% of their time indoors and they expect very high quality services in every possible location. However, end users are generally not aware of the effects of their positions in the received signal levels and the performance of the system.
The aim of this research is to study the effects of user locations on received signal levels in Long Term Evolution (LTE) indoor network. With the development of some applications, users could be guided to self-optimize their User Equipment (UE) terminal to a particular position such that they will receive better connection quality. This will benefit subscribers due to the reduction in unwanted radiation and increase in battery lives. On the other hand, due to the reduction in the radio energy consumption at the Base Stations (BSs) and Mobile Stations (MSs), operators would benefit from the reduced cost and increased capacity.
In order to perform this research, the measurements were carried in the second, third and fourth floor in the Tietotalo building of Tampere University of Technology (TUT) using Nokia’s LTE test network. The measurements were taken at several locations in different corridors and inside different rooms in each floor, and the measurement data were collected and analyzed using Anite’s measurement software – Nemo Outdoor and Nemo Analyzer. The results are presented in terms of Cumulative Distribution Function (CDF) plots and statistical values of Reference Signal Received Power (RSRP) and Signal-to-Noise Ratio (SNR) and conclusions are derived from them.
This thesis proceeds from theoretical backgrounds on wireless communication channels to a brief introduction of LTE. This is later followed by the measurements, results and analysis, and conclusions at the end.
It was found that a slight change in the user location had a noticeable impact in the received power levels. From the experiments, it is advisable that users should position themselves in open and wider spaces and reasonably to locations where no people is moving around.