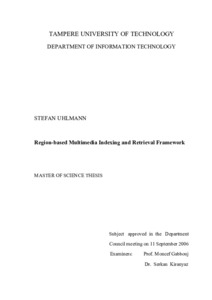 Many systems have been proposed for automatic description and indexing of digital data, for posterior retrieval. One of such content-based indexing-and-retrieval systems, and the one used as a framework in this thesis, is the MUVIS system, which was developed at Tampere University of Technology, in Finland. Moreover, Content-based Image Retrieval (CBIR) utilising frame-based and region-based features has been a dynamic research area in the past years. Several systems have been developed using their specific segmentation, feature extraction, and retrieval methods.
In this thesis, a framework to model a regionalised CBIR framework is presented. The framework does not specify or fix the segmentation and local feature extraction methods, which are instead considered as “black-boxes” so as to allow the application of any segmentation method and visual descriptor. The proposed framework adopts a grouping approach in order to correct possible over- segmentation faults and a spatial feature called region proximity is introduced to describe regions topology in a visual scene by a block-based approach.
Using the MUVIS system, a prototype system of the proposed framework is implemented as a region-based feature extraction module, which integrates simple colour segmentation and region-based feature description based on colour and texture. The spatial region
proximity feature represents regions and describes their topology by a novel metric proposed in this thesis based on the block-based approach and average distance calculation.
After the region-based feature extraction step, a feature vector is formed which holds information about all image regions with their local low-level and spatial properties. During the retrieval process, those feature vectors are used for computing the (dis-)similarity distances between two images, taking into account each of their individual components. In this case a many-to-one matching scheme between regions characterised by a similarity maximisation approach is integrated into a query-by-example scheme.
Retrieval performance is evaluated between frame-based feature combination and the proposed framework with two different grouping approaches. Experiments are carried out on synthetic and natural image databases and the results indicate that a promising retrieval performance can be obtained as long as a reasonable segmentation quality is obtained. The integration of the region proximity feature further improves the retrieval performance especially for divisible, object-based image content.
Finally, frame-based and region-based texture extraction schemes are compared to evaluate the effect of a region on the texture description and retrieval performance utilising the proposed framework. Results show that significant degradations over the retrieval performance occur on region-based texture descriptors compared with the frame-based approaches.