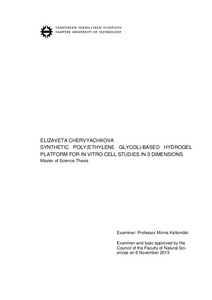 The behavior of cells cultured in two-dimensions (2D) greatly differs from that in three-dimensions (3D), and often does not reflect the actual in vivo situation. Consequently, 3D model systems are becoming more widely used as a tool for in vitro cell research. Hydrogels are polymer networks that contain large amounts of water and are potentially biocompatible. Therefore, hydrogels that mimic natural extracellular matrix (ECM) are being developed as 3D platforms for in vitro cell studies. Poly(ethylene glycol)-based (PEG) hydrogels are artificial gels that allow control over biophysical and biochemical parameters. Moreover, PEG hydrogels are known to be generally not cytotoxic which makes them widely used in a variety of biomedical applications.
This thesis has two major parts. The first part is the synthesis and characterization of PEG-based hydrogels via utilizing Michael-type addition reaction of unsaturated double bonds to thiols. Characterization included observation of elastic properties using atomic force microscopy (AFM) and performing swelling study from which the theoretical mesh sizes of hydrogels were calculated. The actual mesh sizes were checked via beads incorporation into the hydrogels’ network. Moreover, the ranges, within which gels are reproducibly forming, were obtained for a variety of hydrogels and the gelation kinetics was checked using the oscillatory rheology. The second part of this thesis deals with the cell encapsulation into the hydrogel network and observation of cell viability. LS174T cell line was encapsulated into the PEG vinyl sulfone hydrogel with cleavable matrix metalloproteinase peptide (cMMP).
The results of the hydrogel development and characterization part have shown that it is possible to controllably modify mechanical properties of PEG hydrogels. Change of the PEG concentration and incorporation of linear PEGs in between the tetra-functional ones has proven to have a impact on the mechanical properties of the gels.
The results of cell encapsulation part have shown that it is possible to encapsulate LS174T cell line in the kind of hydrogels that was developed and evaluated in this project. However, it remains a matter of future work to optimize the setting and meet the challenges regarding the reproducibility of these experiments and viability of encapsulated cells.