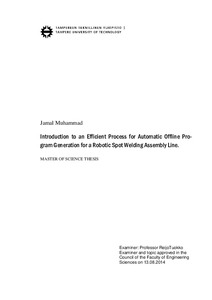 One of the most important applications of industrial robots is spot welding which is used in high production applications mostly in automotive industries where mass production is required. The speed, precision, efficiency and the resulting cost reduction due to mass production are well accepted and well documented advantages of automation of spot welding process using robots. In order to meet the new challenges of increased global competition, manufacturers are forced to seek new technologies for improved production and cost reduction. Such cost cutting efforts can only be achieved by improving the offline programming method.
Offline programming is one of the most crucial parts of modern automotive manufacturing process. In this Master’s thesis a process was developed for faster and efficient offline programming of industrial manipulators in spot welding application. The thesis work has been conducted in Visual Components Oy, Espoo, Finland. In traditional practice there are lots of manual steps involved in the robotic spot welding area. The whole process design of the robotic spot welding is not simple and includes CAD design of the part, shape and complexity of the parts which needs to be spot weld, design of the robot work cell, design and selection of spot weld gun, required production rate, offline programming tool, robot calibration, work cell calibration, work piece positioner design etc. In this report an approach to implement the offline programming of robot based on simulation software with the process knowledge of car-body in white was proposed and partially developed. Some common problems such as motion simulation, collision detection and calibration can be partly solved by this approach.
The thesis consisted of a theoretical section to investigate the current state of art of offline programming tools and methods and a practical section to develop working prototype for demonstration. The implementation of the prototype used the application programmer’s interface (API) available with the simulation software. A prototype was developed to propose an efficient process for putting the whole spot welding process starting for CAD design, work cell setup, offline programming and calibration in a closed loop.