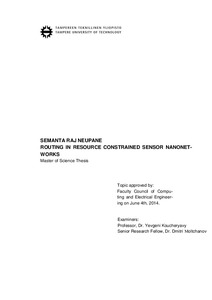 Nano network is the communication network of nano nodes ranging from one to hundred nano meters in size. Nano nodes are resource constrained due to its small size. Limited battery power, small memory unit and low processing capability are the characteristics of nano network. To make communication between nano nodes possible, protocol stack is envisioned. The protocol stack consists of four layers which are: message process unit, network layer, media access control entity and PHY interface. Among these layers, PHY interface is implemented using Time spread on-off keying (TS-OOK) method and Media access control entity is implemented using Transparent MAC. Similarly network layer is implemented using flooding techniques.
Network layer is the least explored and least studied layer in the protocol stack. Many algorithms are developed for PHY-interface but no significant work has been done on routing technique. In this thesis work, we present the solution to the network layer problem. Simple routing algorithm called Flooding is proposed as the routing technique. Flooding alone cannot solve the network layer problem. A new algorithm is needed which addresses the large number of redundant messages while fulfilling the memory and computation constraints of nano nodes.
To make flooding efficient and suitable for nano network, a new routing model called RADAR routing is proposed. In RADAR model, only some of the nodes will generate message at a given time. This model helps to reduce number of packets which leads to the reduction in collision and increase in network throughput. This model is suitable with regard to energy consumption as well. RADAR model is implemented and studied using simulation tool called Nano-Sim. Simulations are performed by implementing RADAR model and without implementing RADAR model by setting different parameters. The simulation output is processed and probability of a packet to reach the destination is calculated for each simulation run. The result showed that probability value increases by implementing RADAR model as compared to without RADAR model. This demonstrates increased performance of RADAR model.