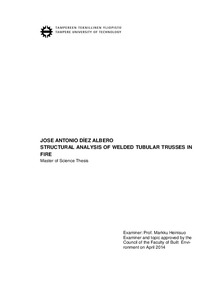 The performance structures made of steel under the action of fire is very important in real constructions and there is not an accurate system to estimate the resistance of them at elevated temperatures. Linear elastic analysis is normally used in the design of welded tubular trusses in fire using FEM models. The main question of this study is to define if the elastic linear theory is suitable with statically determined and non-determined trusses.
Statically determined truss is such that support reactions can be calculated just with equilibrium equations only. Statically determined is ‘internally’ statically non-determined because of the continuous beams for the chords and the eccentricities of the joints. Statically non-determined truss is such that compatibility conditions are needed as well. The strength of the structure and the constraints check are derived from the requirements given in the European building code.
The standard ISO 834 fire is supposed around the tubular truss without fire painting on it. Both linear and non-linear theories are considered in the study using ABAQUS. Non-linear includes both material and geometrical non-linearities. The mechanical analysis is done with constant load and by increasing temperatures given as an input of a previous heat transfer analysis.
The results show that when the truss is externally statically determined the linear model is pretty accurate and can be used to design tubular steel trusses. However, with non-statically determined structures would be needed more in depth studies than the linear elastic analysis.