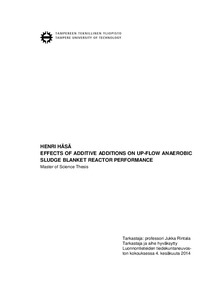 In anaerobic wastewater treatment micro-organisms convert the organic compounds in the wastewater in the absence of oxygen and produce energy-rich biogas. Biogas consists mainly of methane and carbon dioxide and it may be used in electricity and heat production. Up-flow anaerobic sludge bed reactor (UASB) is one of the most used anaerobic wastewater treatment technologies. Sludge bed inside the reactor consist of microbial aggregates called granules.
Micro-organisms require trace elements to sustain their vital functions. Laboratory experiments have confirmed the positive effects of trace element additions in the UASB reactor's performance. The objective of this experiment was to study the effects of added trace element based nutrient solutions on brewery wastewater fed UASB reactor’s performance. Five UASB reactors were operated for 83 days. One reactor was kept as a control reactor, and the other four were fed with nutrient solutions: Solution BDP-881 (containing Fe, Ni, Co, Se, and Mo), Solution A (containing BDP-881 and Zn), Solution B (containing BDP-881, Zn and Mn) and Solution C (containing BDP-881, Zn, Mn and Ca).
The methane production in the control reactor dropped significantly, when organic loading rate (OLR) was 14 g SCOD/l/d (operation day 64). At OLR 16 g SCOD/l/d (operation day 75) the methane production halted. At the same OLR the trace element fed reactors kept working properly. Trace element addition allowed 37 % higher OLR compared to the control reactor. After the methane production halted in the control reactor, it was also fed with BDP-881 solution. In a couple of days, the reactor recovered and methane production and COD removal rose from 0 l/d to 1.7 l/d and from 7 % to 43 %, respectively.
According to this study, it is likely that BDP-881 alone improves the reactor performance, because there were no differences in reactor performance between four nutrient solutions fed reactors. However, there could have been differences, if OLR would have been elevated even more. Maximum OLR for trace element fed reactors should be determined, before the solutions are used in industrial applications.