Binding of Hyaluronic Acid to Its CD44 Receptor 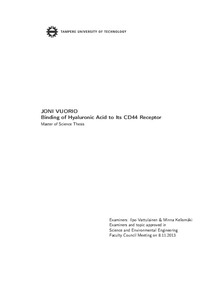 CD44 is a transmembrane receptor protein binding its carbohydrate ligand, hyaluronic acid (HA), in a reversible fashion. In addition to enabling normal cell migration, such as the rolling of white blood cells, these carbohydrate-protein interactions are exploited by malignant cancer cells metastasizing through the blood stream. A normal cell therefore requires effective regulatory mechanisms for controlling the binding affinity between CD44 and HA. Earlier studies addressing this topic have, however, been unable to identify these regulatory mechanisms. More precisely, traditional wet-lab experiments, limited by their spatial and temporal resolution, have been inadequate in describing transient nanoscale phenomena, such as the ligand binding. Previous computer simulations have, on the other hand, been limited by both veracity of simulation models and availability of computational resources.
In this Thesis, we use all-atom explicit-solvent molecular dynamics (MD) simulations to study the adsorption of HA oligomer to a human wild-type CD44 HA binding domain (HABD). In practice, we explore the role of three potential regulation mechanisms: size of the ligand, glycosylation of the protein, and conformation of the protein. First, free energy profiles for the adsorption of HA octamer, revealing the strength of an individual CD44-HA interaction to be over 25 kJ/mol, suggest ligand binding to be irreversible.
Second, by glycosylating the HABD at residues Asn25, Asn100, and Asn110, we show the first of these residues to block most of the native binding interactions. As a result, the strength of the adsorption is, at least when using charge-neutral core pentasaccharides as the attached carbohydrates, decreased by 40 %. More surprisingly, the simulation data reveal a conformation transition previously correlated with high-affinity binding to, in fact, act as a molecular mechanism repelling the bound HA oligomer, and thereby dynamically regulating the biological activity of the CD44.
The findings of this study uncover how the binding of HA to its CD44 receptor is regulated. This information may facilitate the design and targeting of novel drugs and therapies against conditions, such as cancer. Lastly, the insight from this study is of potential value when considering the carbohydrate-protein interactions of other cell surface receptors.