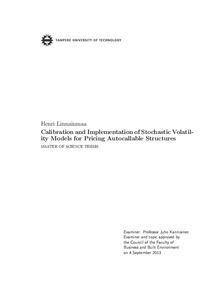 The goal of this study was to find out what benefits do stochastic volatility models provide over the standard Black-Scholes model in pricing autocallable structured products. Also the practical difficulties of calibrating the models to option data and pricing autocallables using the calibrated models were studied.
The models chosen for this study were the Black-Scholes model and the stochastic volatility models of Heston and Bates. The models were calibrated to market implied volatility data of vanilla options using a simulated annealing calibration algorithm. The volatility surfaces of the S&P 500 index and Neste Oil Oyj were used to test the model calibration. For the pricing task, an autocallable structure called the Neste Oil Autocall was chosen. A Monte-Carlo simulation was used to price the structure for each of the models and for different pricing scenarios. Finally, the pricing accuracy, volatility surface fit and practical performance of each of the models were compared.
We concluded that the Black-Scholes model is not reliable in pricing autocallable structures consistently with the market. The Bates model provided a slightly better implied volatility surface fit than the Heston model, but the calibration was not as fast and stable as the Heston model calibration. The pricing accuracy of the Heston and Bates models was almost identical. Price differences are noticeable only when the shortest maturities affect the payoff of the autocallable.