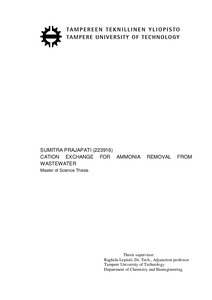 The pollution of surface and ground waters by nitrogen (N) is a common problem. Anthropological sources of N in water are from animal farms, untreated municipal, industrial, and agricultural wastewater, which has elevated the eutrophication of lakes, estuaries and rivers. N species in the environment can impact also on human, animal, and plants wellbeing. Ammonia (NH3) is the initial indicator of N pollution and exists as ammonium (NH4+) and ammonia (NH3 (aq.)) in water.
This work studied the use of ion exchange (IE) to remove NH3 from the wastewater (bioslurries) using natural adsorbent material (zeolite). IE experiments were conducted in two phases. In phase one, batch experiments were carried out to study the effects of NH4+ load, pH, solids, contact time, and particle sizes (0.2-0.5 & 0.6-2.0 mm) on NH3 removal capacity of zeolites. The exchange kinetics and isotherms of both zeolite particles were determined using data obtained from NH4+ load studies. In phase two, column experiments were used to study the effect of flow rates, pH, and regeneration on NH4+ removal capacity of zeolite to determine the feasibility of the process in natural environment.
In both experimental methods (batch and column), NH3 adsorption capacity (Q) was significantly high with 0.2-0.5 mm compared to 0.6-2.0 mm particle size zeolite, because 0.2-0.5 mm had greater specific surface area and shorter diffusion path.
The batch studies showed that the initial NH4+ Q increased with increased concentration of NH4+ in solution. NH4+ adsorption was rapid at the beginning of the experiment as all the adsorption sites were empty and maximum adsorption took place within the first 10 minutes of the experiment time. The pH effect was studied at pH range 6 to 8.5 with 0.2-0.5 mm zeolite. At this pH range, the pH had minimal effect on the NH4+ removal capacity of the zeolite. The kinetic analysis showed that the adsorption of NH4+ on both zeolite types at different NH4+ concentrations followed the pseudo second order model indicating sorption capacity is proportional to the number of activated sites occupied on the sorbent. Equilibrium isotherm data were fitted to the linear Langmuir and Freundlich models.
The batch experiments were also performed to study the effect of total solids (TS) on NH3 removal capacity of the zeolite. NH3 Q and removal efficiency (E%) of both zeolite types decreased with an increase in TS concentration in the solution due to interference of the solids with the IE process.
The column studies showed that the lower flow (10 ml/min) rate had maximum NH3 removal capacity compared with the higher flow rate (50 ml/min) as low flow rate provided more contact time between zeolite and the solution. The pH effect was studied at pH range 6.5 to 9.5. The NH3 Q was more or less the same at the pH range of 6.5 to 8.0 and decreased sharply at pH 9.5 due to N-species distribution and partial dissociation of zeolite.
The column regeneration experiments showed that 0.5M NaCl was better than HCl regeneration. NaCl regeneration can efficiently regenerate exhausted zeolite and even after 6th regeneration cycle, NH4+ E% of zeolite was not affected. On the other hand, regeneration with HCl showed that HCl was not able to regenerate exhausted column, it was probably due to competition between NH4+ and H+ ions at lower pH.
In conclusion, this study showed that N in raw bio-slurries can be efficiently removed with IE and natural zeolite. However, bio-slurries are usually characterized with high solid contents, which can hinder the application of IE to such medium in large-scale application. Further studies are needed to determine the best approach for sustainable IE application for N removal from liquid bio-wastes, e.g., combined with pretreatments.