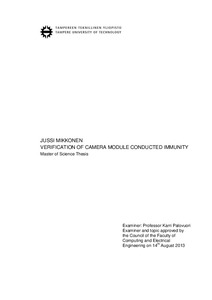 Cameras are nowadays important part of mobile devices like smart phones, mobile phones and tablets. Nokia is concentrating on camera development, and good cameras are one way how Nokia is differentiating from its competitors.
During camera development there are many kinds of tests that need to be done to verify the performance of a camera module. Testing can be time-consuming for Nokia and camera suppliers. Automated tests are a good way to reduce the time needed for testing and the workload of test operators. Automating usually also improves test repeatability which makes it safer to count on camera suppliers’ measurements. With repeatable test systems, more testing can be moved to camera suppliers and hence problems are found in earlier phases of camera development. Purpose of this thesis was to develop an automated conducted immunity test for camera modules.
The conducted immunity test is a part of electromagnetic compatibility (EMC) tests, and it tests how well the camera module can tolerate fluctuations on power supply lines. Power supply fluctuations can cause row noise to an image, which lowers the image quality. Noise on power supply lines can come from inside or outside of the camera module. On a smart phone camera, there are possible noise sources inside the small camera module like an autofocus (AF) and an optical image stabilizer (OIS). Therefore it is important to pay attention to camera module immunity against power supply fluctuations.
The automated test replaced an old manually done conducted immunity test. Biggest problems with the manual test were that it took too much time to do the test, it was not repeatable enough, and it did not find all problem frequencies. The automated test eliminated these problems. Test results shows what are the problem frequencies and how much the image has row noise at those frequencies. This gives understanding of camera module immunity and also gives guidance what sensitive frequencies should be avoided if there is possibility to affect to noise signal frequencies. The automated test has already been taken into use at Nokia and camera suppliers.