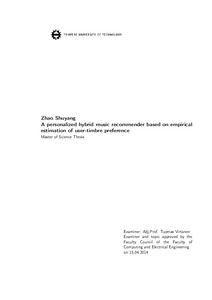 Automatic recommendation system as a subject of machine learning has been undergoing a rapid development in the recent decade along with the trend of big data. Particularly, music recommendation is a highlighted topic because of its commercial value coming from the large music industry.
Popular online music recommendation services, including Spotify, Pandora and Last.FM use similarity-based approaches to generate recommendations. In this thesis work, I propose a personalized music recommendation approach that is based on probability estimation without any similarity calculation involved. In my system, each user gets a score for every piece of music. The score is obtained by combining two estimated probabilities of an acceptance. One estimated probability is based on the user’s preferences on timbres. Another estimated probability is the empirical acceptance rate of a music piece. The weighted arithmetic mean is evaluated to be the best performing combination function.
An online demonstration of my system is available at www.shuyang.eu/plg/. Demonstrating recommendation results show that the system works effectively. Through the algorithm analysis on my system, we can see that my system has good reactivity and scalability without suffering cold start problem. The accuracy of my recommendation approach is evaluated with Million Song Dataset. My system achieves a pairwise ranking accuracy of 0.592, which outperforms random ranking (0.5) and ranking by popularity (0.557). Unfortunately, I have not found any other music recommendation method evaluated with ranking accuracy yet. As a comparison, Page Rank algorithm (for web page ranking) has a pairwise ranking accuracy of 0.567.