Business Intelligence Trends in Finland in 2013 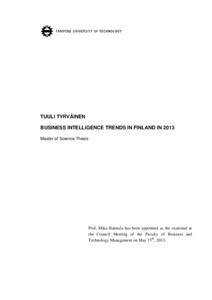 Business intelligence (BI) is an important management tool for companies in order to make right decisions at the right time. BI, in its different forms, has been studied globally for several decades and in Finland a unique research series was started at Tampere University of Technology in the beginning of the 21st century. This study is already fifth realization, which continues the tradition of the studies conducted in 2002, 2005, 2007 and 2009.
The main objective of this research is to examine the current state of business intelligence in companies operating in Finland and to identify BI related trends by comparing the research results to former studies. In order to form a comprehensive picture of BI it is observed from different points of view based on literature. Also hypothetical BI trends are identified. In addition to this theoretical part an empirical part is conducted. In order to collect extensive research material, all in all 56 companies from seven different industries were surveyed primary by telephone interviews.
The results suggest that BI has established a steady position in the large companies operating in Finland. BI is not usually considered as a separate function but it is often dispersed in different functions of the company. This conclusion is supported by the fact that majority of the companies have no separate budget or strategy for BI. Over half of the respondents mentioned that they had not yet reached the aimed level in BI or that there were some improvement needs identified in BI. Also majority of the companies are going to increase substantially or moderately the companies’ investments in BI within the next five years. According to the study there is variation between the different industries. For example on the field of real estate and construction none of the subject companies had a separate budget for BI where as in the manufacturing industry around half of the companies had defined a separate budget for BI. The findings of this study can be used to understand better the BI applied by Finnish companies and to identify important BI trends.