Creating a new factory layout and calculating its efficiency 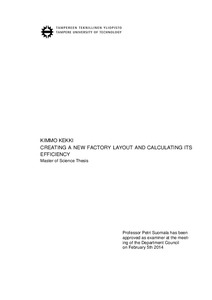 The objective of this study was to develop a Future Factory concept for Metso Mining and Construction (Tampere) Inc. and calculate its operational and financial benefits in comparison to current operations. Future Factory concept involves both the design of the factory layout and the operational systems, which includes the amount of workforce required.
The role of manufacturing operations has become more and more demanding during the past decades. Today, production environment must be flexible, highly productive and still maintain its low assembly cost and high product quality. Metso Mining and Construction Corporation’s Tampere factory plant has developed to the state it is now during its 100 years of history. This master’s thesis has been made to introduce a totally new concept of manufacturing and support factory’s long-term development plan.
This thesis consists of two parts. The first part, theoretical background, which consists of three themes, is designed to support the second, empirical part. Firstly, the theoretical background introduces the basic manufacturing philosophies related to Toyota Production System (TPS) and Lean, which were designed to illustrate the best practices for manufacturing operation. Secondly, the design procedure of a new factory layout was researched in order to define a systematic approach to a new layout creation. Finally, the theoretical framework suggests ways to evaluate the newly created layout’s performance compared to the current operations. In addition, benchmarking to corporations having similar assembly operations were made in order to find new ideas outside the company. The empirical part of this thesis uses the created framework to reach the defined objectives.
As a result, the thesis introduces a new master layout for Tampere CSE manufacturing, which covers all the designed operations. The calculations indicate a significant improvement not only in the operational performance related to production lead time, but also in the factory’s cost structure. Furthermore, the designed Future Factory concept reveals a strong potential in current operations and the human productivity involved. As a conclusion, the Future Factory master plan suggests key drivers to support the operational change, which are partially feasible in current facilities.