The effect of coatings on the performance of the microelectrode arrays 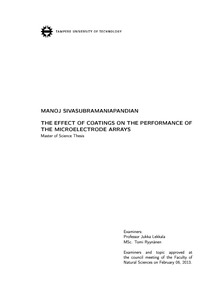 Microelectrode arrays (MEAs) are pretreated with suitable surface molecules prior to culturing of cells, since the properties of the substrate have a decisive effect on the adhesion, migration, differentiation, and the growth of the cells. The purpose of this thesis is to study a few of these coating materials, and to evaluate their impact on the performance of the MEA.
Standard 8 × 8 MEA is used alongside the 6 well MEAs, and the differences in the impedances and the noise magnitudes of the electrodes are analysed upon coating. Experiments with neural cells were conducted in order to realise the repercussions on real life applications. An effort is also made to determine the thickness and the surface texture of the coatings, using a stylus profilometer and an atomic force microscope (AFM) respectively.
Polyethyleneimine (PEI) and laminin, and gelatin coatings did not effect any significant change in the overall performance of the MEAs, but a substantial increase in impedance was observed with MatrigelTM. The experiments involving the cells were inconclusive due to limitations in imaging. The thickness measurements of the PEI and laminin, and gelatin coatings were unsuccessful, owing to the intrinsic surface variations of the substrate. However, the thickness of the MatrigelTM coating was found to increase with the concentration. Surface characterisation of the MEAs revealed significant variations in the surface roughness, with the addition of PEI and laminin. The kinetics of adsorption of the PEI and laminin molecules to the sensor slide was studied using surface plasmon resonance (SPR).