Towards complete characterization of supercontinuum coherence 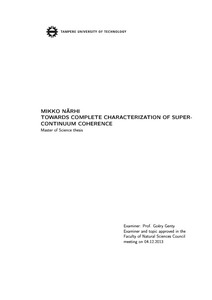 Experimental characterization of supercontinuum second order coherence properties is performed for the fi rst time. The experimental method is based on an approximation separating the supercontinuum second order coherence functions into coherent and quasi-stationary parts. The approximation was discovered recently in light of numerical studies and the objective of the work in the thesis is to verify these numerical results experimentally.
In the theory section the mathematical formulation of the coherence functions is given accompanied with discussion of the physical meaning of the functions. Furthermore the physical processes and experimental parameters aff ecting supercontinuum coherence properties are adressed to further understand the behavior of the results. The possibility for using approximations of the second order coherence functions for modeling supercontinuum behavior in optical systems is also considered. Finally emphasis is put also on describing the various experimental methods used to ensure reliable retrieval of the coherence functions.
Experiments are performed for three distinct cases: coherent, partially coherent and incoherent supercontinuum generated in a photonic crystal fi ber by a Ti:Sapphire femtosecond laser with an adjustable peak power for the input pulse. Obtained results are compared to simulated results generated with parameters corresponding to the experiment. Good agreement between the experimental and numerical results is observed, further justifying the approximation made and laying groundwork for future studies made in the fi eld.