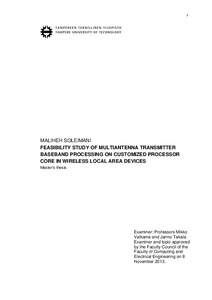 The world of wireless communications is governed by a wide variety of the standards, each tailored to its specific applications and targets. The IEEE802.11 family is one of those standards which is specifically created and maintained by IEEE committee to im-plement the Wireless Local Area Network (WLAN) communication. By notably rapid growth of devices which exploit the WLAN technology and increasing demand for rich multimedia functionalities and broad Internet access, the WLAN technology should be necessarily enhanced to support the required specifications. In this regard, IEEE802.11ac, the latest amendment of the WLAN technology, was released which is taking advantage of the previous draft versions while benefiting from certain changes especially to the PHY layer to satisfy the promised requirements.
This thesis evaluates the feasibility of software-based implementation for the MIMO transmitter baseband processing conforming to the IEEE802.11ac standard on a DSP core with vector extensions. The transmitter is implemented in four different transmis-sion scenarios which include 2x2 and 4x4 MIMO configurations, yielding beyond 1Gbps transmit bit rate. The implementation is done for the frequency-domain pro-cessing and real-time operation has been achieved when running at a clock fre-quency of 500MHz.
The developed software solution is evaluated by profiling and analysing the imple-mentation using the tools provided by the vendor. We have presented the results with regards to number of clock cycles, power and energy consumption, and memory usage. The performance analysis shows that the SDR based implementation provides improved flexibility and reduced design effort compared to conventional approaches while main-taining power consumption close to fixed-function hardware solutions.