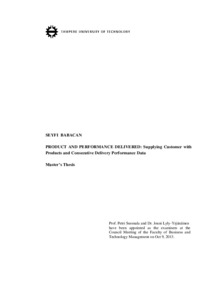 Supplier Oy (names will be kept confidential) is a Finnish joint venture established recently in the area of hydraulic hose assembly manufacturing for big Finnish OEMs. The company is considered to revolutionize the traditional methods of hydraulic hose assembly manufacturing by a majority of the industry experts. With the usage of extensive IT software and software driven machinery, it has now become the most effective hydraulic hose assembly manufacturing company, not only in Europe but in the whole world.
The idea was developed by a small team of people that combined creativity and experience. However, precise designing of every detail took a considerable amount of time. It is now believed that each detail that was considered during the design process, contributed to the implementation phase in a big portion. Author himself not only witnessed the design process, but also contributed to it in a deeper extent. Some tasks such as 3D design of the cells as well as whole factory layout and optimization of flows were led by the author primarily. After the design process was finalized, ramp-up phase started. Planning things on paper was one aspect, but actually building the whole factory from the scratch was a challenging task. After the ramp-up was completed successfully, development phase began. It was then necessary to make the small improvements in various areas, to improve processes and products, providing high level of customer satisfaction without sacrificing from the initial effectiveness of the whole idea.
In winter of 2012, this thesis was initiated with the aim of analyzing cost effectiveness of the case company. However soon after the initiation, the topic shifted to the area of supplying the customer not only products, but also own performance measurements. The reason for this shift was a recent turn of events during that time. Customer and the case company found a mismatch in their metrics. It was realized that on-time-delivery ratio was drastically different according to two sides. Since both supplier and customer were in collaborative manner, they decided to investigate this mismatch and tried to solve it in a way that would be beneficial for both parties. After the investigation, some reasons for this mismatch were understood. Interestingly, supplier’s metrics were yielding more accurate results than the metrics of customer. This raised the question from customer side whether they should use the supplier’s metrics and hence the topic of the thesis shifted towards this more recent topic.
The concept of supplying metrics as well as products is found out to be a rather novel area in the literature. The literature review resulted in only few small sentences of such concept in different articles. Therefore, it became more interesting to research this topic and write the thesis in a way that also case company and its customer can benefit from it to a greater extent. The framework was built based on multiple smaller frameworks. Eventually, it combined three dimensions: (1) Lean manufacturing, (2) Customer-supplier relationships, (3) Performance measurement systems. It was revealed that supplying metrics was not a far away concept in lean partnerships considering the previous attempts already done under the concept of open book accounting (OBA). In other words, companies which were collaborative partners were already familiar to the sharing of internal information with each other. Only difference this time was the information was based on non-financial data whereas in OBA it was financial data only.
The findings of the thesis includes that sharing of vital information requires a certain level of trust and collaborative manner between parties. Lean manufacturing is proven to be an important driver in this trend of moving towards collaboration and close customer-supplier relationships. Based on the framework and logical deduction, shared metrics are in fact aligned with the complete philosophy of lean manufacturing. Since excessive performance measurement can also be considered as a waste (muda) in lean philosophy, sharing performance measures can easily yield to a reduction of total number of metrics between parties. Thus, both sides can benefit from this information sharing activity. Also, in case of a mismatch it is expected for collaborative parties to move towards troubleshooting to resolve any conflicts, which results in a more accurate performance measuring from the holistic viewpoint of the relationship. Finally, it is forecasted that sharing metrics can also initiate an improvement in other areas such as customer satisfaction or higher visibility of production.