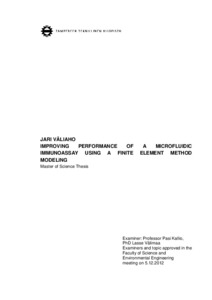 In-vitro diagnostics is currently going through changes. Instead of using central laboratories to analyze samples, point-of-care (POC) diagnostic devices are used more and more. With these devices tests can be performed rapidly near the patient in a doctor’s office, at bedside or at a patient’s home. Most POC devices are based on microfluidics, where small fluid volumes are handled inside micro scale channels. With microfluidics it has been possible to miniaturize these devices. Thus, their sample and reagent consumption is significantly smaller than in conventional methods. What comes to the performance of POC devices’, their sensitivities and limit of detection values are still worse than in conventional methods.
The objective of this research was to study how the performance of a microfluidic immunoassay cartridge would be enhanced. The aim was to study how different polystyrene grades and reaction chamber geometries affect immunoassay performance.
Injection molded microfluidic cartridges were used in the research. Specific antibody coating was fabricated on the reaction chamber surface. Analyte concentration was measured with fluorescence nanoparticles containing europium chelates. These nanoparticles were used as they provide higher signal levels and better sensitivities than conventional fluorescence labels. For studying the effects of geometry, a simplified finite element method (FEM) model was created to simulate the immunoreactions occurring inside a chamber.
Results show that signal levels caused by unspecific binding of labels are similar in all materials, but with Empera 124N polystyrene grade signal levels of specific binding were higher than with other materials. FEM models of original reaction chambers showed that the system is fully diffusion limited. New smaller geometries were designed with the help of the FEM model. The main difference was that sample was moved back and forth over the reaction area during incubation. Measurement sensitivity was increased about 1.4-fold and the limit of detection was decreased from 1 mU/L to 0.52 mU/L. Micro structures on the reacting surface, were also tested and they increased measurement sensitivity by 3.8–fold compared to a smooth surface.
As a conclusion it can be said that already a simple FEM model can be used to describe what happens in a system and how the system can be optimized. As a smaller reaction chamber was used, sensitivity and the limit of detection were enhanced and reagent consumption during fabrication was decreased. There are still some problems concerning the control of reciprocating flow and its repeatability which need to be solved.