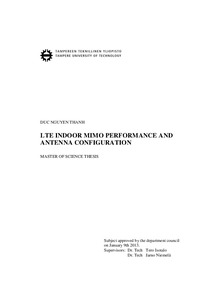 Long-term evolution (LTE) and multiple input multiple output (MIMO) have earned reputations to be a cutting‒edge technology, which can boost significantly wireless communication performances. However, many aspects influence on LTE MIMO efficiency; those include propagation environments and antenna configurations.
The goal of the thesis is to study performances of LTE MIMO on downlink in indoor. MIMO gains over transmit diversity and single antenna are the objective. Additionally, the study compares MIMO indoor performances with different antenna configurations at LTE base station and UE, including space diversity and polarization diversity.
Some results obtained in this thesis follow the expectations what have been studied in literature and previous practical studies but some differences are also pointed out.
Medium access control throughput (MAC TP) and some system parameters in LTE network that are linked with TP are analysed; those parameters are CQI, MCS as well as MIMO utilization. Effects of indoor propagation, such as LoS, NLoS, good and bad signal levels on SNR strength and MIMO utilization are clarified.
In overall, MIMO outperforms transmit diversity (TxDiv) and single antenna in LTE indoor. The overall MIMO MAC TP gains are about nearly 40.0% over TxDiv and more than 20.0% over single stream. LoS environment boost SNR strength. Hence, up to 35.0% TP gain over single antenna is achieved. However, LoS signals make the channel become correlated due to lack of multipaths, causing that MIMO is not fully utilized. The gain of MIMO over single antenna is reduced at no LoS environments, particularly only around 17.0% and 21.0% MAC TP gains are recorded at NLoS channels with good signal levels and weak signal strength, relatively.
The overall TP gain the UE experiences by using TxDiv over single antenna is roughly more than 20.0%, but LoS environment limits TxDiv performance. Hence, at LoS channel, TxDiv performance is reduced by around 2.0% compared to single stream. The worse the channel, the better TxDiv performs. The highest gain is at cell edge environment when TxDiv improves throughput more than 40.0% over single antenna.
Clearly, antenna configuration impacts network performance. Large horizontal separation (7λ) between antenna elements outperforms small separation (0.5λ) in terms of SNR, MIMO utilization and MAC TP. The MAC TPs of large separation by using omni-directional and directional antennas are almost similar, around 27.0 Mbps. Space diversity with omni-directional antennas provides roughly 14.0% MAC TP improvement while only approximately 4.5% TP gain can be achieved with directional antennas. Vertical‒horizontal polarization pair deployed at LTE base station is found to provide better performance over vertical‒vertical polarization and X‒pol pairs. Signals also appear to be more correlated with vertical-horizontal polarization pair since MIMO utilization gets better values, MIMO utilization gains are around 18.0% over vertical-vertical polarization pair and 6.0% over X-pol pair, resulting in around 31.7% and 17.0% MAC TP gains over the two latter, relatively. The results also point out that changing polarizations at UE do not give clear MAC TP and MIMO utilization improvements.
From the radio network planning point of view, the results obtained in this thesis can be considered as guidelines for indoor network planning and optimization for network operators. It is important to conclude that based on the measurements made in this thesis, space diversity (7λ) with omni-directional antennas and vertical-horizontal polarization pairs appear to give optimal indoor performance.
However, it should be taken into consideration that all results presented in this thesis are highly dependable on the chosen antennas, LTE network systems, devices and indoor environment where the measurements are carried out. Hence, the results may vary with the factors mentioned.