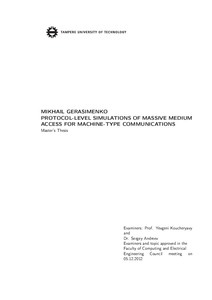 In recent years, Machine-Type Communications (MTC) has become one of the most attractive technologies in the area of wireless networking. Different sources are predicting a large grow of smart grid machine-to-machine deployments in several decades, which also means that the total number of wireless devices will increase dramatically. In connection to this problem, the choice of the standard, which will satisfy all the MTC requirements without harming current wireless deployments has become very relevant. Because of these reasons, many companies are proposing to modify one (or several) of the current wireless standard in a way that it will be possible to use for MTC purposes. This will be perfect from point of view of interference problems, because they will be already included in a standard itself.
Third Generation Partnership Project (3GPP) Long Term Evolution-Advanced (LTE- A) is one of the most rapidly developing wireless technologies, that seems to be an ideal candidate for future MTC implementation. However, while the capacity of typical LTE-A network should be enough to satisfy trafﬁc demands of large number of MTC devices, the signaling is not ready to face new requirements. In this Thesis, we are considering and partly solving problems, that could occur in LTE-A signaling channels under MTC conditions. Particularly, these are data access mechanisms, which could be realized via Physical Uplink Control Channel (PUCCH) and Physical Random Access Channel (PRACH). Speaking about assessment methods, the research made in this work is based on 2 approaches: simulation and analysis. Both of them are also in details described in the pages of this Thesis. As a conclusion it could be said that PUCCH channel is not suitable for the MTC data access, while PRACH is having problems only in heavily loaded (overloaded) cases and should be slightly modiﬁed to face them.