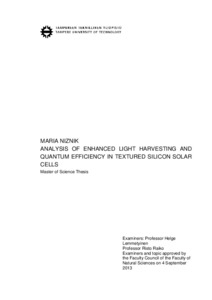 Textures on semiconductor materials, such as monocrystalline and multicrystalline silicon (Si), consist of an array of geometrical structures. The main advantage of such structures is the fact that they are able to significantly increase the amount of transmitted light on the cell surface without the use of other antireflection and light trapping techniques, such as antireflection coatings. Texturing a Si wafer includes three benefits: decrease in external reflection, increase in internal reflection preventing the rays from escaping the solar cell, and increase in effective absorption length due to tilted rays.
The aim of the thesis is to determine the influence of textures on the total quantum efficiency (QE) of the cell. Firstly, various types of texture structures with different physical parameters, as well as their antireflection and light trapping capabilities are investigated. It becomes evident throughout a brief literature review of textures that regular inverted pyramids are featured in the most efficient commercial solar cell and provide the best optical enhancements. State-of-the-art modeling techniques that aim at developing light simulation programs targeted to analyze solar cells’ reflectance were also investigated. A simulation code based on a chosen analytical geometrical model type is developed and employed to estimate front-face reflection and transmittance of regular upright pyramids in 2D. It is noted, that the results of surface reflection obtained by the simulation code are fairly consistent with the results found in the literature, signifying that such complex problem does not necessarily require a numerical approach. Finally, the internal quantum efficiency (IQE) and external quantum efficiency (EQE) analyses of textured and perfectly flat cells are performed and the obtained results are compared to each other.
The simulations show that texturing does indeed provide significant decrease in front-face reflection in comparison with a flat Si surface and a single-layer antireflection coating with an optimal thickness. Furthermore, throughout the study it becomes clear that surface recombination velocity does not affect the IQE significantly in thick solar cells. Therefore, the deteriorating effect on the cell’s electrical performance, an increase in surface recombination velocity due to an increased front surface area in textured cells, is ignored. Also, it is noticed that increased front surface recombination velocity affects only a small fraction of wavelengths of interest, and the surface of a cell can be also passivated to prevent surface recombination altogether. The IQE analysis also reveals that textured cells provide higher IQE values in the longer wavelength region than flat cells, due to tilted light path.
The results obtained in this thesis highlighted the numerous benefits of texturing silicon solar cells, since more light is able to penetrate the surface and contribute to the short circuit current.