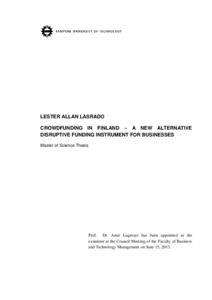 Crowdfunding has gathered great momentum around the world as an alternative entrepreneurial financing mechanism with an estimated 2500 Million Euros of fundraising in 2012 alone. The phenomenon is emerging in Finland currently and seen the emergence of four active Finnish platforms from 2012. The recent events surrounding the successful Crowdfunding campaign by movie director Timo Vuorensola from Finland has created a positive vibe. However the controversy of a book campaign by Senja Larsen on Kickstarter raised questions about Crowdfunding and its sustainability in Finland. Therefore, the thesis explores the role of Crowdfunding in a Finnish context and analyze if it would be disruptive to traditional financing mechanisms in Finland.
This research involves in-depth analysis of literature published on entrepreneurial finance and Crowdfunding. Furthermore, in-depth interviews with the three Crowdfunding service providers in Finland are carried out. In addition, interviews of an experienced banker, a senior government representative and a financial service provider are carried out to give a holistic picture. Overall, the threefold approach is taken to get a realistic understanding of fund raising environment in Finland and the impact Crowdfunding could make in Finland.
In the results of this study, the gap in the current entrepreneurial finance situation in Finland is showcased. Crowdfunding positions itself as an alternate mechanism rather than disruptive, however with some apprehensions. The understanding of Finnish fundraising laws and affinity of the Finns towards localized services proved to be the main drivers for Finnish CF. Educating the Finnish entrepreneur and the crowd regarding the risks, benefits and legalities of Crowdfunding is the key for success of Crowdfunding in Finland. Overall the study showcases positive and welcoming sentiment towards Crowdfunding in Finland.