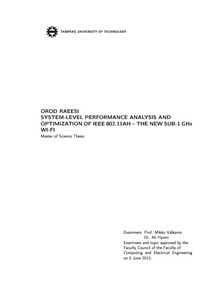 Internet of Things (IoT) is a concept which will have major effects on our future lives. It will introduce a novel dimension to the world of information and communication technology where connectivity will be available anytime, anywhere for anything. This will implicitly introduce billions of devices and stations that need to communicate within the IoT network. Consequently, it is necessary to design new wireless technologies to support them. IEEE 802.11ah is one of these technologies which exploit IEEE 802.11 standard advantages while benefiting from certain changes specifically made to satisfy IoT requirements like being able to handle this amount of devices and being power efficient. IEEE 802.11ah which operates in sub-1 GHz band is expected to assure 1 km coverage with at least 100 Kbps data rate and it should support beyond 2000 stations.
This thesis evaluates the performance of IEEE 802.11ah and some of its features in various scenarios using a system-level simulator developed in this research work. Comparing the developed simulator's results with two analytical models, one introduced in the literature and one developed in this thesis, proves the high accuracy of the simulator in modeling the IEEE 802.11ah network.
The performance analysis shows that for IoT use cases with relatively low packet size (256 bytes), it is better not to use RTS/CTS access scheme. Based on the presented results, it is concluded that frequency management mechanisms, link adaptation algorithms and Restricted Access Window (RAW) mechanism, should be used in most of the practical cases to have higher energy efficiency and improve the general system performance.