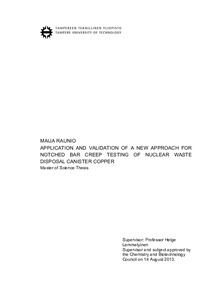 Time for the disposal of the nuclear waste is shortly at hand. The concept for the disposal in Finland and Sweden is to store the nuclear waste deep into the bedrock for at least 100 000 years. The nuclear waste is first inserted to a cast iron canister and then the package is sealed inside a copper canister (made of oxygen free phosphorus doped copper Cu-OFP), main function of which is to protect the inner parts from corrosion caused by the groundwater. The copper canister will be subjected to hydrostatic pressure inside the bedrock, and therefore creep to some extent. To see how the copper canister behaves in the repository, multiaxial creep testing to Cu-OFP must be done. To get as realistic results as possible, the creep testing specimens shouldn’t experience cold work before the actual testing. This thesis examines the possibility to use a new testing bar geometry manufactured by wire-erosion to minimize the amount of cold work, usually caused by specimen preparation (for example milling). The new testing approach involves a square shaped bar, which has circumferentially two sharp octagon shaped notches. The square bar is made by wire-erosion instead of the earlier used double notched round bar made by turn-milling. The main goal is to find out, how the new geometry suits for multiaxial creep testing and whether the results are more realistic if the effect of cold work could be minimized.
The thesis is divided into two parts. In the literature study part, issues related to creep properties of Cu-OFP are explored. Theory related to the creep testing methodologies is discussed: mainly uniaxial and multiaxial creep properties as well as creep modelling issues are being studied. Also the effects of sulphide rich groundwater on the creep properties of Cu-OFP are investigated. In the experimental research part, ten multiaxial Cu-OFP creep tests were performed from which four specimens were manufactured according to the new square geometry. The other six tests were carried out with the round geometry manufactured by turn-milling. FE analysis and post metallurgical evaluation is added in the end to get a better view of the processes taking place inside the specimen. Also the determination of skeletal point and corresponding skeletal stresses for square and round geometry is made by FEM.
The study indicates that the amount of cold work in square specimens seems to be lower than in the round specimens or non-existent. However, more tests by square specimens are needed for the final validation. The creep results seem to behave as the creep behaviour models predict. The determination of skeletal point for sharp notches is challenging, but a suitably small skeletal zone was possible to define. In the future a round geometry made completely by wire-erosion could be a good choice for multiaxial creep testing.