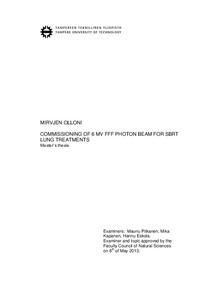 The use of stereotactic body radiation therapy (SBRT) for lung treatments is very popu-lar in radiotherapy clinics. This is because of its better results compared to the other treatments. The development of flattening filter free (FFF) beams has given a new per-spective to this treatment. In this thesis, the commissioning of SBRT FFF beam for cen-tral lung treatment was aimed.
Two spherical volumes of diameter 3 cm (PTV 3) and 6 cm (PTV 6) representing the planning target volumes were created within the central lung area in Alderson phantom. The dose plan for the treatment was done for 6 MV FFF photon beam using stereotactic radiotherapy (SRT) volume modulated arc therapy (VMAT) and dose fractions of 4 Gy, 7.5 Gy, 11 Gy and 18 Gy. Dose distribution calculations were performed in Eclipse treatment planning system (Varian Medical Systems, Palo Alto, CA). Radiation Ther-apy Oncology Group (RTOG) protocol was utilized to obtain the required dose confor-mity within the target. Dose plan verification was done by ionization chamber matrix detector (in two different setups: combined with the cubic solid water phantom and mounted in the gantry) and radiochromic film inserted within the cubic solid water phantom. Irradiation was done with Varian TrueBeam STx linear accelerator (Varian Medical Systems, Palo Alto, CA).
Results of dose conformity were checked using dose-volume histograms (DVH) and were in accordance with the RTOG protocol. Moreover, measured and calculated dose distribution data were compared using gamma analysis with the acceptance criteria of 3 %, 3 mm. According to the suggested criteria (less than 5 %) of technical reports se-ries (TRS) 398, the general average values of the disagreement between measured and calculated data obtained from the ion chamber matrix detector for PTV 6 were within the required limits, 4.2 % for both of the detector setups. However, this was not the case for PTV 3 because the general average values were 6.2 % and 6.5 % for each of the de-tector setups. Main reasons for these unacceptable results were mostly due to the small field sizes and poor resolution of the matrix detector. Film measurements showed very satisfactory results regarding the shape of the measured dose profile compared to the calculated one. The only problem with film results was the unacceptable absolute dose difference between these two dose profiles, approximately 10 %, which most likely was due to inaccuracies from film calibration or post processing.
Based on those results, it was concluded that the commissioning of the 6 MV FFF pho-ton beam for SBRT lung treatment was partly successful. Before its clinical application, further studies are needed related to the mentioned dosimetric uncertainties.