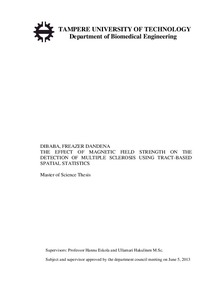 In recent years, diffusion MRI has been instrumental in detecting microstructural changes early enough inside the brain for diagnosis of neurological diseases. The change in diffusion metrics is used as a measure for identification of pathological abnormalities. Diffusion MRI has been used for detection of multiple sclerosis (MS), a neurological problem occurring due to environmental factors and immune system attack against the central nervous system (CNS) which comprises of brain, spinal cord, and optic nerves.
In this research, the effect of magnetic field strength was tested by comparing control subjects of 1.5T and 3T diffusion MRIs (DMRIs) with the patients who had 1.5T diffusion MRIs for clinically isolated syndromes (CIS) indicative of multiple sclerosis (MS).The experiment was divided into three groups and all comparisons were done by Tract-Based Spatial Statistics (TBSS) method with relation to age.
Tract based spatial statistics (TBSS) is a method which is used to compare two diffusion MRI image groups. It is a method which uses the advantage of voxel based morphometry (VBM) and tractography that is by being fully automated and cover full area without specifying tracts and solving alignment and smoothing issues. In TBSS, the first process is preprocessing the images for possible artifacts like eddy current. Next is aligning the images nonlinearly using affine transformation using medium degree of freedom. This stage is important to create mean FA skeleton which is used as a frame work for comparison between image groups. Skeletonisation is done by applying ‘thinning’ (non-maximum-suppression perpendicular to the local tract structure). Then Project each FA data onto the skeleton by filling the skeleton with FA values from the nearest track center. Finally carry out voxelwise statistics across subjects for possible difference between the two groups.
The experiment done for the effect of magnetic field strength showed there is high significant difference between control groups (1.5T and 3T) because of magnetic field strength difference and the same result occurred between same magnetic field strengths groups (1.5T control and 1.5T MS patients) due to the effect of multiple sclerosis. While comparison between 3T control groups and 1.5T MS patients show the highest difference due to effects of both MS and magnetic field strength.