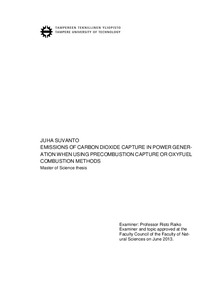 Carbon dioxide capture from large point sources, such as power plants using fossil fuels, is essential for mitigating further global warming. New combustion methods are being researched to help increase the partial pressure of carbon dioxide in the flue gas of a power plant, to make carbon dioxide capture faster, cheaper and less energy intensive. The most important methods for this are gasification and combustion with pure oxygen instead of air.
Gasification of solid fuels is compatible with so called precombustion capture methods, where the carbon dioxide is removed from stream before combustion of the remaining synthesis gas. Combustion with pure oxygen, or oxyfuel combustion, reduces the amount of nitrogen in the flue gas, effectively resulting in only carbon dioxide and water vapour as the combustion product. Both methods result in higher carbon dioxide content of the gas to be treated, compared to conventional combustion with air.
Several methods exist for separating carbon dioxide from other gases. These methods are based on absorption, adsorption, membrane separation, cryogenic separation or their combination. Each capture method, as well as the two combustion methods mentioned above, has its advantages and disadvantages that concern both the capture capabilities of carbon dioxide and emissions potentially harmful not only to humans and environment, but also to related processes, such as transportation of carbon dioxide.
The emissions of different carbon dioxide capture are highly dependent on the capture process due to the different chemicals used in each method. The chemicals used are not the only possible emissions, but also thermal and chemical degradation of the chemicals may result in new, potentially thus far unpredictable compounds. The precise composition and effects of these emissions are not yet fully understood and research concerning their nature is required.
This thesis serves to show different possible emissions related to carbon dioxide capture processes and to provide this information for others, in order for them to develop measurement devices required for emission control.