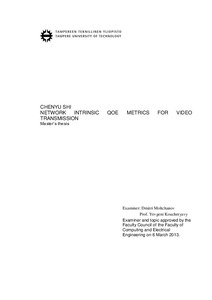 Nowadays, networking is more and more important to people’s lives. Especially video streaming is playing a significant role in study and entertainment life. Many new applications appear to give people better videos. Because of high definition video, video compression and evaluation techniques become very useful to not only video web sites but also network operation and providers. Talking about video evaluation, Quality of experience (QoE) is an important indicator indicating the user experience of a video. There are a number of factors affecting performance of video delivery in the Internet with queue management discipline being one of the most important. From the networking perspective, there are two main router queue management, drop tail and Active Queue Management (AQM). Drop tail is widely used and it is simple to configure and maintain. Even though it may cause continuous packet loss when congestion happens over the network which may have a great impact on video streaming, it, nowadays, is still widely used. AQM could be a better way to manage the router buffer. Random early detection (RED) is one of AQM and it can avoid congestion because it drops packets randomly. However, it is more difficult to configure.
The experiment in this paper is a statistical experiment to get the relationship between packet loss probability and correlation and QoE to provide a new network-intrinsic QoE metric..The process of video transmission over the network is simulated. The new metric is obtained by analyzing the obtained results. Even though it is a reference model, it is still very important. First, it gives a better way to estimate video quality using the network parameters. Second, analyzing the obtained results we see that , in order to get a better quality of video, RED is a better choice.
In the future, the more accurate metrics can be obtained by more times of experiment. Such values would provide more detailed quantitative relationship between packet loss probability and correlation and QoE.