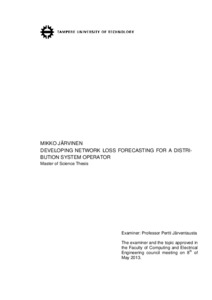 Elenia Oy is a forerunner in Finland in adopting the new automatic meter reading (AMR). By late 2008 most of Elenia’s customers were equipped with a new meter that is capable of recording and sending hourly consumption figures. Since then Elenia has been working on ways to utilize this new data. In recent years more attention has been given to network losses. Network losses are one of the largest items of expenditure for distribution system operators (DSO) and as such a good target for cost optimization. In addition the Energy Market Authority is contemplating on possible ways to include network loss costs into the regulation model.
Network losses are formed whenever electric power is transmitted from a place of production to end-users. The losses are formed mainly in the resistances of lines and transformers which are heated up by the loss energy. There are two kinds of losses: no-load losses and load losses. No-load losses are relatively constant and do not depend on the load. Load losses are proportional to the square of the transferred power. Before the large-scale installation of AMR meters the hourly consumption figures were unobtaina-ble and as a consequence also the amount of losses was uncertain.
The main goal of this thesis was to develop a usable Excel-based application for predicting hourly network losses. Loss forecasts can be utilized in procurement and hedging of losses. The application is based on hourly consumption figures acquired from the meter data management system (MDMS) and it formulates the predictive models with the use of multiple linear regression analysis. The application has separate regression models for each month and for the whole year. The main predictor variable is temperature and in addition there are calendar-based indicator variables. Separate mod-els are made for two response variables: network losses and network loss percent.
A forecast was made for January 2013 with the application and the results were compared to the observed values. The results give some promise but also raise questions. In general the loss forecast follows the trend of the hourly losses fairly well but the predicted losses are a bit too high on average with an average error of 2.1 MWh and mean absolute error of 2.8 MWh. The mean absolute percent error is 7.3%. Some of the magnitude of the errors is attributed to data quality issues in the early 2012 data.