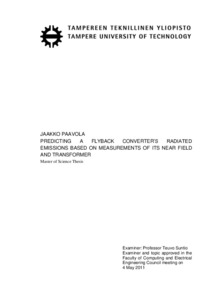 Chargers and power supplies of household appliances almost always incorporate switched mode power supply technologies, such as the flyback topology. An inherent problem with electric products using power switching technologies is their inadvertent generation of electromagnetic emissions. Also, there may be great variation in the levels of electromagnetic emissions between different specimens of a given product. This variation is normally due to variation in the physical structure and materials of the electric product’s components, that is, due to variation in its components’ homogeneity. Such variation in the quality of the switching converter’s transformer component can account for much of the variation in the electromagnetic emissions.
The true levels of a given product’s electromagnetic emissions can be determined using standard electromagnetic emissions tests. However, these tests are not suitable for screening out sub-standard specimens in the manufacturing process because they are time-consuming and require expensive measurements. Instead, indirect methods of predicting electromagnetic emissions must be used for such screening purposes. The research described in this paper aims to discover a quick and inexpensive method for predicting the radiated emission levels of a flyback charger equipped with a given transformer.
The research showed that the use of certain indirect measurements in the transformer’s association could be used to predict the true radiated emission levels with some accuracy. I analyzed the measurement readouts of four near-field probes, two of which were magnetic-field probes measuring the magnetic field near the transformer and the other two current probes measuring the magnetic field around the input and the output conductors of the charger. I also analyzed an assortment of electrical and physical properties’ measurement readouts measured directly from the transformer. The analysis was mainly correlation computations between the readouts of the above measurements and those of the standard radiated emissions test for the same charger and transformer combination. The analysis revealed that the measurements of all four near-field probes and of various electrical properties all showed a clear correlation with the radiated emissions. The strongest correlation was obtained with the current probe measurements, as was expected from the literature.
Nevertheless, the discovered results are difficult to apply in practice, such as a production line test that screens out sub-standard transformers. This is because although correlations are evident from the results, their degree is not sufficient for creating a general rule for rejecting specimens based on fixed tolerance limits. Successful development of such a quality control procedure calls for a follow-up research focusing on enhancing the measurement accuracy and more elaborate data analysis methods.